Hugo Vihlen on Fathers day after crossing the Atlantic in 1993. Image courtesy of National Maritime museum.

Hugo Vihlen is a former US pilot, experienced both with fighter and passenger planes. He fought in the Korean war and flew airliners for a company called Delta Airlines. After all that he began building extremely small ocean capable sailboats. His first attempt at a world record Atlantic crossing was In 1967, at the age of 36. He took off from Casablanca, Maroco on a 1.8 m long, 1.5 m wide and 550 kg home made boat called April Fool. He almost made it across the Atlantic, reaching 10 km off the coast of Miami after having spent 84 days on sea. By the way, there is a seatbelt equipped seat in the boat to keep the sailor put when rolling in heavy weather. He was unable to finish the feat since the boat got caught in a strong current and unfavorable winds. He was eventually picked up by a US coast guard vessel after having denied initial tow offers. 25 years later he went at it again. In 1993 he built Fathers day. The plywood-fiberglass composite boat was initially 1.67 m long. He failed to set sail from the US east coast since the coastguard did not approve his boat for such an endeavor. Around that time he met Tom McNally, a Brit who was also attempting a solo crossing in a small boat. McNallys boat was called the Big C and it was about 4 cm shorter than Vihlens. After a failed launch, Vihlen took his boat to Canada, cut it 5 cm shorter and successfully set sail from St. John, Newfoundland. He reached Falmouth, England after 115 days on sea. The boat was shorter than the sailor. Thus Vihlen slept on his back with his feet up. Sources write that his discomfort turned to pain. He faced bad weather and close calls with large boats. He packed food for only 85 days, carrying 65 ready meals, 7.5 liters of M&M candy, 3.7 liters of dry fruit, 100 cans of fruit juice and 128 liters of water. He lost over 15 kg in weight. Fathers Day was donated to the National Maritime museum in Cornwall, UK in 2006. Both of Vihlens journeys have been published as books, “April Fool: Or, How I sailed from Casablanca to Florida in a six-foot boat” and “The stormy voyage of Fathers day”. Both books can be found on Amazon. The latter feat should still hold as the shortest sailboat crossing the North Atlantic. Sebastian Näslund and his Arrandir 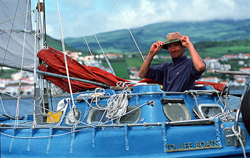 Arrandir is a 4.35m boat built by Swedish adventurer and freediver Sebastian Näslund. He converted the boat from an old 70’s rescue vehicle. He has crossed the Atlantic six times, there is a documentary and a book by the sailor describing his journeys.

Sven Yrvind and his boats

Yrvind is an Swedish adventurer who has basically spent his whole life building very small sailboats and sailing them around the world. He should still be holding the record for smallest yacht sailing around the Cape Horn. Was he also the first to sail singlehanded to Tristan da Cunha?

A quote from his wepage:

Modern man in the big cities are like captured animals. We have all the comfort and food we need, still we are bored. But because we live among millions of equally bored people we do not notice the gloom. Only occasionally do we meet a surviving free spirit and wonder why he is so happy. It is not comfort which makes me happy.

Greg Kolodziejzyk and his crazy ideas. Greg designed and built a pedal-powered boat to travel 4500 kilometres from Vancouver to Hawaii. Unfortunately he canceled the project, understanding his risks at the right time. Still, the road to the conclusion is exciting to follow on his webpage, along with capzise tests and sea trials of his built vessel. Amongs other things, Greg holds the record for the most distance traveled by a human solely on good ol’ muscle power in 24 hours, both on land and water. On land, in a specially built bike, he travelled 1041.24 kilometers in a day. On water, he travelled 245.16 kilometers in a pedal powered boat. Now he wants to build a pedal powered airplane and snatch the record travelling above ground, flying.

Kristopher J. “Harley” Harlson wanted to sail around the world in a 8-foot boat called “Sea Biscuit”. Read about it here, and here. A comprehensive overview of worth-mentioning small sailboats and those that have gone around the world:

A MUST READ, for all beginner boatbuilders, how to rig a small sailboat: